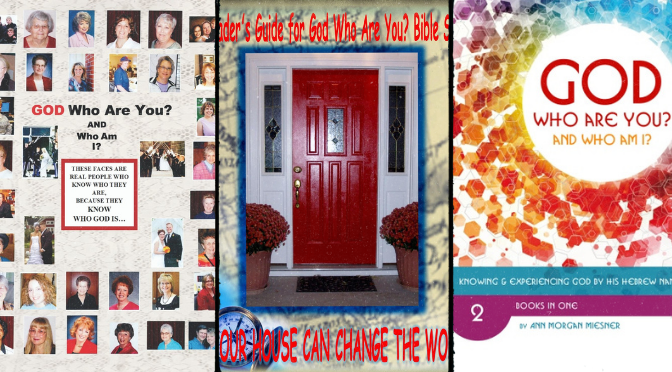 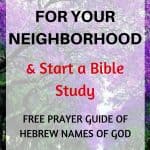 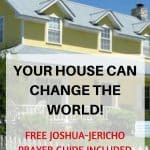 After my Bible study was published, I knew that unless I was willing to share my story in reaching out to my own neighborhood, the Lord could not and would not bless any other teaching or speaking thing I did. He said,

“Do you really love your neighbor as yourself?”

So, I designed a JOSHUA-JERICHO PRAYER-WALKING GUIDE for my neighborhood that organizes the twelve names of God into six days with two each in six rounds. The seventh day, or round, I listened to praise music and/or praised the Lord.

I’ve learned since to never try to take new territory without giving it this week-long preparation time of breaking ground before trying to plant seed. Believe me, it works!

Keep reading to learn what happened in my own neighborhood.

After I committed and prayer-walked my neighborhood, God brought an unknown neighbor to me at my job site. When I saw her address, I quickly asked, “Would you be willing to come to my house for a Bible study?”

I could hardly believe how this young mother’s eyes lit up as she said yes and that she used to go to one. I was ashamed to learn she lived around my block for one year without my knowing her.

The Lord brought another young mother of three from out of town to my hospital work site. He made it very clear I was to share with her part of my testimony about how God paid our debt in 1979, which would be about $40,000 today.

Her face grew white as she said that was the exact amount they were in debt. Although she lived twenty minutes away, she jumped at the chance to come to my house at night after she taught school all day. Another neighbor stopped at my desk at work and readily agreed to come.

These three invites that God brought to me were easy. Going to the rest of my  neighborhood on our figure 8, the equivalent of four blocks and 51 houses, was not as easy. I was nervous!

I finally stopped and prayed, “Lord, you promised to give Joshua every place the sole of his foot should tread, and I know You are doing that for me. It’s not by my might, nor by my power, but by Your Spirit. You promised to send Your angels before me, in Jesus name.”

Just then, I watched a vehicle pull into the house I was to stop at next. After I rang the doorbell, a young lady I partially knew answered the door. After I explained the flyer that I handed her and told her she could find out more from my Web site, she said, “That sounds like fun!” I was taken aback and said, “Oh, really?” We both laughed.

She had been praying for about a year whether she should start a Bible study. She was envious of those in the large city who had access to more opportunities.

She brought two other ladies to our group–one, another neighbor and the other one from another neighborhood. We started with eight women–most from different denominations. One didn’t show, but she had bought the book. We later learned that the mother of a lady in our group was witnessing to this very same lady.

Leader’s Guide for the GOD Who Are You? Bible Study was Born: Your House Can Change the World

As I led that first study I had not thought it necessary to have a leader’s guide, but I took notes of what I did and questions I asked, and quickly found that a guide and answer key for the exercises was necessary. I designed it for someone who had never done this before,  because I had not, either.

After the study was over, three women from the group decided to lead one in their own neighborhood or church. My neighborhood acquaintance who had been thinking about it, now actually did lead one in her church. The school teacher/mother of three led it, one chapter per week, in her mother’s home.

[I’m currently giving the leader’s guide with purchase of the workbook. Learn more at this button]:

Why is Your Neighborhood House so Important? 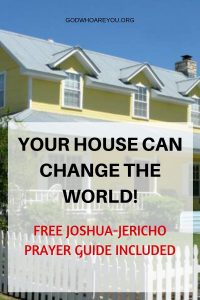 The Lord asks the question, “Where is the house you will build for me?” (Isaiah 66:1) meaning, how can He possibly be confined within the four walls of a building?

Churches that offer small-group, discipleship, cell groups that study the Bible live out this reality–taking Jesus to the people, rather than expecting the Church to come to the church. These are the churches that are growing. And, your home can be that small group.

Our world is changing fast, and we must be ready for anything and everything. If you have not read my article, “Family Tipping Point Letter,”  please to do so. It’s available as Appendix A in the leader’s guide. [Appendix B: Story Behind the Cover; Appendix C: EACH ONE TEACH ONE, and the JOSHUA-JERICHO PRAYER-WALKING GUIDE.

We may see times when we have to rely on very primitive kinds of social contacts. This is where our homes become so important. My leader’s guide discusses 5 reasons why.

The Leader’s Guide to God Who Are You? AND Who Am I?  Bible Study also discusses three groups of people who are called to this special task of gathering in the end-time harvest–men, women, and godly couples; also, eight things to know in how to get started in this exciting adventure for which God has placed us on Earth at this time in history. It also gives two examples of how to make your flyer.

Whether or not you use my Bible study workbook to lead your group, this guide will inspire you in sharing your own material.

Why is the Neighborhood-Red Door on the Leader’s Guide?

We changed out our front door a few years ago. The white door’s instructions said it should be painted. It looked fine to me, so I left it thinking I’ll get that done “later.” Before the women came to my house, I wanted to have my door painted.

Jim finally agreed with the color I wanted to paint it–RED. By the time I actually got it done, my Bible study group was ready for the third module–Jehovah Tsidkenu–The Lord Our Righteousness–When God sees me He sees RED. He sees the blood of Jesus and His royal red blood flowing through our veins.

As I painted the door all day that Saturday, I thought about Jehovah Tisdkenu and what I’d just learned in private devotions about the scarlet yarn the priest used in a cleansing ritual upon the healing of a person in the Old Testament–Leviticus 14.

The scarlet yarn, blood of a lamb, and oil were all involved in the cleansing process. Since the oil signifies the Holy Spirit, I began to realize that when we “apply” the blood, we are invoking the work of the Spirit.

At the moment I finished the primer coat, I looked out the window and saw two men standing on my porch. They had coached football with my husband 39 years ago! They lived over one hour away but had never been to our house. I invited them in for a special reunion before Jim arrived home. Before they left, I gave each of them my book for their wives, for which they seemed genuinely grateful.

My RED door signifies the Passover, the Exodus, the blood of the Lamb–the blood the Israelites spread over the tops of their door frames and the sides of their houses where they ate the lamb the night before they left Egypt for the Promised Land–which also signifies heaven.

As I painted, I could see the Israelites painting their door frames and then turning around and going back inside, having been covered by the blood of the Lamb.

I could hear the words of the Lord saying, “The blood will be a sign for you on the houses where you are; and when I see the blood, I will pass over you. No destructive plague will touch you when I strike Egypt” (Exodus 12:13).

Why the red door in your neighborhood? It’s a bright light, and a visual reminder we are covered by the blood of the Lamb, and that when God sees us He sees RED (Jesus).

Not everyone who leads this study should feel they must paint their door red, especially when it just would not look right. A red door does not take the place of what the blood of Jesus did, but maybe there’s another visual reminder He would give you.

All I can say is that when I was painting on that Saturday afternoon, I saw women painting their door red which said to God, “Here is my house You can use to light up and change the world.”

Who knows? How about you? When we are obedient to God, we could just start a movement while fulfilling the Great Commission.

IN CASE YOU MISSED IT, HERE IS YOUR FREE PRINTABLE OF THE JOSHUA-JERICHO PRAYER-WALKING GUIDE 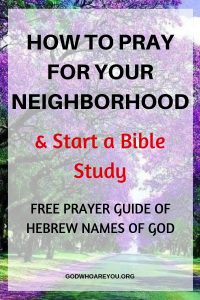 4 thoughts on “How to Start a Neighborhood Bible Study”

This site uses Akismet to reduce spam. Learn how your comment data is processed.

Where and how It all started

I met Denise (not her real name) after I accepted a job in the business office at Mercy Hospital in Fort Scott, KS in 1999. She was questioning everything about her life; she had multiple health issues, was childless and struggling with her relationship with God and her husband.

However, her thirst for knowing God made her a leader in helping to get our women’s group started.

There was a Christian men’s group in town but no women’s group. We thought that odd. Worn out and burned out from my previous job, I told God I was not going to start one and that if He wanted it done, He would have to do it Himself.

I had thirty books about angels left from my book business and thought it a good idea to give them to the thirty women who decided to go to Anne’s conference. Since her ministry name is “AnGel” it seemed appropriate. Read more…

Know Who You Are by Knowing Who God Is

I help people know who God is, so they can know who they are and can feel loved and live with peace, joy, purpose and be prepared for Jesus’ return. Learn more …